Benefits of a Bike-Friendly CIty 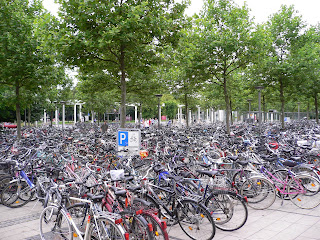 In some places around town, bicycles far outnumber cars.  Indeed, Hannover, like most German cities, is remarkably bike-friendly.  Most streets have bike lanes, usually with their own stop lights.  There are well-marked and maintained bike paths through the wooded areas, around the lakes and marsh, covering the urban planners' green space.  There are tunnels under train tracks and bridges over highways for bikes.  High petrol taxes discourage driving and traffic congestion and parking problems make biking more appealing.  But the attraction goes beyond that-people tend to feel a strong connection to their bicycles.

It's not just the bikers that benefit from this extensive and expensive infrastructure, for biking produces lots of positive social and economic externalities.  It reduces pollution and eases traffic congestion.  Biking promotes better fitness and health, lowering overall health costs.  Bike-friendly cities are more attractive to young, educated, creative-class workers.  And, beyond that, biking puts one in closer contact with the world, forcing closer contact with fellow citizens and the natural and manmade environment, subtly reinforcing a sense of community, belonging, and ownership. 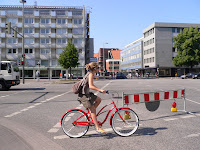 Thus, investments in bike infrastructure produce larger social and economic returns than one might first think.  For U.S. cities, it is not just about catering to a small group of avid bikers, but reducing the barriers to biking, making it more feasible and convenient, and thus reaping the health, pollution, and social gains to be had.

More folks say they would like to commute by bike than do, for example.  Economists might say that they reveal their true preference when they get in their cars and drive.  But we should also take folks' stated preferences seriously.  And, in fact, making it easier to bike does increase the number of bikers on the street dramatically.  I have seen it happen in Nashville.  When I first started biking to work there five years ago, there was hardly anyone else on a bike.  Since then, bike lanes have been added to street in my part of town, and the number of bikers has shot through the roof.  Just reducing barriers slightly, providing a little nudge, is enough to change behavior-and allow people to do what they want to do.

We can learn a lot from places like Hannover in terms of making our cities more bike-friendly.  The bike lanes on streets are clearly marked.  At intersections, there is a painted box on the street where bikes can move in front of cars when turning.  Bikes often have their own light at intersections, and the choreography of stop lights and crossing signals is elaborate: the pedestrians' light turns green a few seconds before the others, and bikes too are given a few second head start (which is both safer and clears the intersection faster).  On many one-way streets, two-way bike traffic is still allowed (more convenient for bikes, and slowing cars down as well).  Bike paths in the woods and surrounding countryside are well marked with directions and distances.  And there are frequently park benches and trash cans and even little kiosks dotting the bike paths, even seemingly out in the middle of nowhere.
Posted by Ted Fischer at 3:40 AM