Choosing Not To Choose

Can less choice make us happier?  I think so, at least in certain contexts.  Lately I’ve been trying to avoid making food choices.  If we go out to eat, I let someone else decide where and then order what they choose; at home, I eat what is laid out.  Since I spend all day making decisions, I find I’m happier making fewer choices in my free time.
And it is not just with food.  I think we would be more content, and have more leisure time, if we didn’t have to manage the dizzying array of choices we make all day, every day.  A recent essay on “choice” in The Economist (http://www.economist.com/node/17723028?story_id=17723028 ) notes that PepsiCo makes 20 different varieties of Tropicana orange juice alone.  Add in the other brands and their own variations, and just selecting the right juice for one’s tastes and pocketbook is almost overwhelming.  And we haven’t even gotten to the cereal aisle yet.
It’s just too much.  That same Economist article notes that when Procter & Gamble reduced the varieties of Head & Shoulders shampoo (from 26 to 15) sales increased by 10%.  We average consumers don’t have the time or inclination to research and compare every product category—but that is what it would take to make the best choices, and so the plethora of choice constantly reminds us that we are probably not making optimal decisions a lot of the time.
A growing body of psychological research (from folks like Sheena Iyengar, Mark Lepper, and Barry Schwarz) find that satisfaction with a purchase (of jams, chocolates, and pension plans) decreases with the breadth of variety offered.  As Barry Schwarz notes, too much choice can debilitate and even tyrannize.
At the same time, there is a deep skepticism and fear in U.S. popular discourse over taking away choice—especially having the government reduce individual choice.  Certainly, we should tread lightly where individual liberty is concerned.  Yet, the tone lately has been especially shrill, with Sarah Palin, Glenn Beck, and a growing chorus issuing dire warnings about the government stealing our freedoms, taking away choices, and the creeping socialist menace that represents.  Palin has attacked new student nutrition guidelines as a “school cookie ban.”  Beck warns that the Obama administration believes that “you’re incapable of making decisions” and (mis)reports on bans on soda and week-long detentions for eating a single Jolly Rancher.  (See Judith Warner’s essay in the NY Times Magazineat http://www.nytimes.com/2010/11/28/magazine/28FOB-wwln-t.html )
Protecting individual liberties against the state has a long and (mostly) illustrious history in the United States, as we are reminded, none too subtly, by the guiding analogies of tea party politics.
And choice is hard to argue against.  It is an expression of freedom, of liberty, of free will and self-determination.  More choice = more freedom.  Who could argue against that?
Yet, we must allow two big caveats.  First, our choices almost always impact others, and, living in a society as we do, we have to make allowances for others.  As economist Bob Frank has argued (discussed below), we must take into account the wide-ranging impacts (“externalities”) our decisions have when marking the boundary between individual liberty and government regulation.  Second, we are so overwhelmed with choices, choices with complex implications, that we often need help with our choices. Brand names and various labeling regimes help.  We rely especially on government evaluations in major purchases (of cars, for example, with safety, mileage, and other comparables). Or, take health insurance.  Those of us fortunate enough to have company provided insurance already have had our choices narrowed by HR folks.  Even then, the differences in my options are always complicated and opaque, and so I do whatever my friend Joseph does (since I trust his judgment and know that he researches such things).
Personally, I think I would be much happier and relaxed if I had to make even fewer choices.  That doesn’t mean I want socialist style stores—long lines and little choice.  But I would like my choices better curated for me—by shopkeeps, producers, employers, friends, whomever, as long as they can be trusted.
The trick, as always, is to safeguard the collective good while maximizing individual freedom.  It is a delicate balance.  But more choice does not automatically mean more freedom.
Posted by Ted Fischer at 12:30 PM No comments:

Dispatches from Guatemala: No Guns, No Smoking 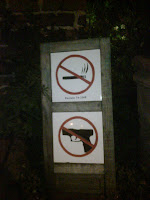 The sign in front of the upscale steak house in Guatemala City used the familiar red circle and backslash to forbid guns and smoking.  Such signs are not uncommon in Guatemala, but one admonition is taken seriously and the other often ignored.  And therein lies a paradox of this complicated place: no smoking but plenty of shooting, a country that is crumbling while it is flourishing.  Violence is rampant and the state has largely abdicated control over the police and legal system; all the while, many social indicators are up, with infant mortality going down and education improving.  And, oddly, it is much easier to slip a gun into a bar than to get away with sneaking a cigarette.
Guatemala is a violent place.  The first thing most visitors notice is the ubiquity of guns.  Guns, guns everywhere.  Armed guards are not only in front of banks but in office buildings, neighborhood pharmacies, and on coke trucks.  Alfredo, a middle-class businessman I know, carries a gun daily for protection—to get past the metal detectors in office buildings he has a pocket full of decoys: a ring of keys, a metal lighter, and finally a knife, which satisfies all but the most vigilant guards and leaves him with his 9mm.
For Alfredo and his peers, such weapons provide a sense of protection against the violence sweeping the streets.  Guatemala City’s murder rate is 109 per 100,000; for comparison, New York’s rate is below 6.  This is a whole new magnitude of violence outside of war, and it affects all aspects of life for the city’s residents.  The papers are daily filled with gruesome tales of the slaughter, and everyone has their own stories to tell, every life having been touched.

The most poignant examples for me are the most mundane—the little, often taken for granted, ways violence defines cultural norms.  Take window tinting, for example.  The fashion in Guatemala now is to tint all of a vehicle’s windows midnight black—even the front windshield.  This makes for dangerous driving, and for pedestrians, but potential thieves have no idea how much firepower might be inside.
Still, Guatemala is making great strides with a number of new social policies.  Starting in February 2009, Guatemala banned smoking inside of bars and restaurants.  One would have thought—and indeed I did—that in the context of such lawlessness and violence, such a prohibition would have little impact.  But, lo and behold, it has taken hold, and is widely enforced.  A justified cynic might say it is because smoking in bars would be an ideal target for mordidas (bribes), thus encouraging police to vigorously enforce the regulation, if for private as much as public gain.  But it also shows how quickly new ideas can take root, and how advances in public goods are being made even crime grows.

And there are many other signs of hope.  Riding buses in Guatemala City has become dangerous.  Last year, a bus driver was killed on average every other day, and gangs extorting money had taken to lobbing grenades at buses.  Borrowing an idea from Bogota (and a few other cities), Guatemala City has open a new Transmetro.  Often described as an above-ground subway, the Transmetro is a bus system that runs on dedicated lanes and makes stops only at fixed stations.  The stations require a prepaid card be swiped for entry (eliminating cash on the buses) and there are security personnel in the stations and on the buses.  It reduces traffic congestion, decreases crime, and speeds bus travel--another example of effective public policy.
Posted by Ted Fischer at 11:39 AM No comments: