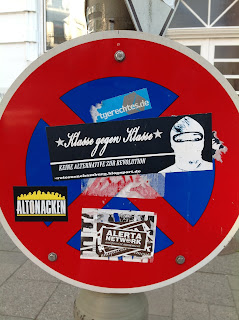 The graffiti in Germany is more in your face, demonstrating a much greater awareness of class positions.  I also find it interesting the German quirk of having what I think of as "sticker graffiti," stickers printed with what would normally appear as painted graffiti and plastered on signs and poles.

And, while this is exactly typical, the other day I ran across an "exchange hut," where folks can leave things they no longer need and pick up things others have left. This one is from the Altona neighborhood of Hamburg.

And to add to the list of peculiarities not available in the States, let us look at the at the German meat counter. 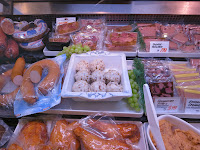 Here we see Schmalzbällchen, balls of lard that one can get with onion or with raisins and apple pieces.  The first time I visited Germany, I went with my wife-to-be to a New Year's party where we were served schmalz smeared on bread.  In Alabama, we pour pork fat into an old coffee can and then throw it away.  What a waste. 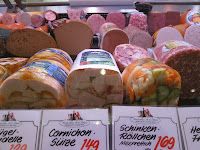 Germans have a seemingly endless variety of aspic with vegetables and/or unidentifiable pieces of meat that they cut like salami or bologna.
Posted by Ted Fischer at 6:49 AM No comments:

Planet Money, consistently producing the best economics journalism around, have a couple of recent stories of interest.  (Hey, Adam Davidson: still waiting on you to broadcast the interview with me and Bob Frank that you recorded last year!):

Investors pay Germany to hold their cash: as a sign of the topsy-turvy economic times in which we live, Germany's latest bond offering sold at a negative yield: investors are actually paying Germany to hold onto their money for them.  I wonder if I can get a deal like that from my bank.
Posted by Ted Fischer at 5:30 AM No comments: 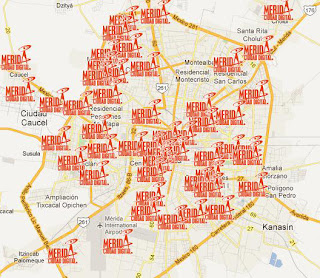 At the ICA meetings I heard a fascinating paper by Gabriela Vargas-Cetina who reports on free public internet access in Merida (Yucatan, Mexico).  Merida provides an extensive network of free wireless internet access in public parks throughout the city.  The service appears to work exceptionally well (Gaby reports speeds are faster than in her university office) and, amazing, each park has a kiosk with a telephone for free technical support. 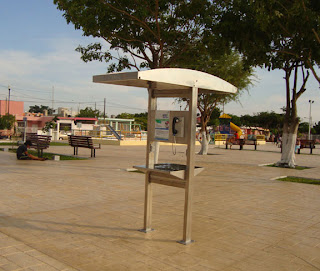 Posted by Ted Fischer at 5:10 AM No comments:

Elizabeth Dunn and Michael Norton report on fascinating research that suggests temporary abstinence increases pleasure--and that sharing treats increases happiness even more.  We might think that if we like something and have the means and access to consume it, the more we consume, the happier we would be.  In fact, not overindulging, or even indulging, increases our appreciation for the object.  Dunn and Norton call this underindulgence.  This links to the argument in my new book manuscript, described in a previous post, that regulating our choices can, counter-intuitively, increase our wellbeing.
Posted by Ted Fischer at 4:38 AM 1 comment:

Pennsylvania or the Netherlands?

Merle Hazard has done it again! Capturing neatly the political and economic conundrum we face come January, this time Merle pays tribute to the surf songs of yesterday.  Another must listen from that pioneer of "Country and Eastern."  Also check out Merle's lyric contest on the PBS NewsHour website.

Posted by Ted Fischer at 5:20 PM No comments:

My friend Bruce Barry has not only a sharp mind but a sharp pen to go with it.  Like H. L. Mencken, Bruce is always ready with clever and to-the-point analysis tempered by just the right tone of levity.  We are fortune that Bruce's running commentary is now available at BruceBarry.net.  Check it out.
Posted by Ted Fischer at 5:12 PM No comments: 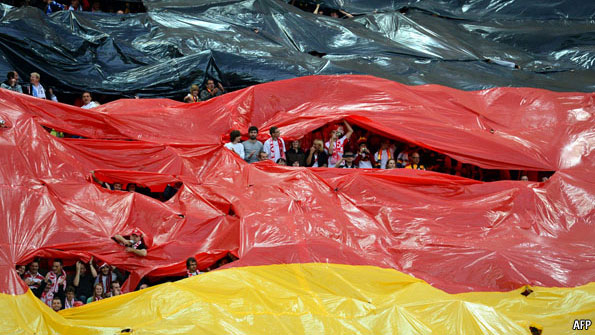 Germans have, understandably, had a complicated relationship with their flag and other symbols of nationalism since the Second World War.  When I first started coming to Germany in the early 1990s, I was struck by how seldom one saw a flag in contrast to the States.  But things have been changing since then.  When we were here during the 2006 World Cup, I saw for the first time folks hanging flags on their houses and their cars, publicly proclaiming their pride in Germany.

If 2006 was the start, the European Cup this year marks a new phase for German pride in their flag.  I have never seen so many German flags--they even reach post 9/11 levels of flag display in the U.S.  THE ECONOMIST this week has a great report on why this is a healthy thing and how current German patriotism is of the unaggressive, even brotherly, variety.