What is the good life?  And how do we go about achieving it?  This is the subject of my just-finished manuscript “The Good Life: German Eggs, Guatemalan Coffee, and the Work of Wellbeing.”

It is also the subject of a two-week online seminar run by the Open Anthropology Cooperative titled “The Good Life: Values,Markets, and Wellbeing” See:http://openanthcoop.ning.com/forum/topics/the-good-life-values-markets-and-wellbeing .
Posted by Ted Fischer at 4:37 PM No comments:

Help Give Children in Guatemala a Better Life

Posted by Ted Fischer at 7:43 PM No comments:

A recent study out of Stanford finds little documentable nutritional value for organic foods.  As reported by NPR, the metastudy found no impact in individuals' actual health based on eating organic and that the nutritional benefits of specific vegetables grown organically is lost in the vast range of nutrient levels found in all supermarket vegetables.

One of the folks interviewed on NPR remarked that this didn't change his view and that he would continue buying organic anyway.

Indeed, the premium paid for organic foods is a clear instance of what James Foster and I term "moral provenance," valuing an item not just on its utility but the social conditions in which it was produced and distributed.

Speaking of provenance calls to mind Bordeaux wine and Parma ham and fine art.  Yet, there are many sorts of provenance, signaling moral values, ecological externalities, identity, and other elements as well as quality, taste, and authenticity.  The notion of “fair trade” as well as “union made” is based on provenance.  eBay’s seller rating system is so successful because it can provide some assurance of provenance in the context of anonymous, distant, and likely one-time transactions.  Even the mortgage backed derivative crisis of 2008 and beyond comes back to an issue of provenance (and bad and misleading provenancing of underlying securities).

The "Laws" of Economics

My brother David sent me this from the Bastiat Institute.  My father was a huge fan of Frederic Bastiat, the acerbic wit of the Austrian economics movement, and always kept a case of his The Law in his car trunk to hand out to anyone he thought might be interested and read it.  He probably gave away thousands of copies over his lifetime. 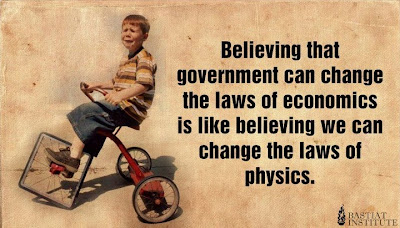 Sentimentality notwithstanding, the problem with this saying is (1) that it is so widely held (implicitly) in traditional neoclassical economic teaching and explicitly in public policy, and (2) that it fundamentally mistakes social contrivances for natural law.  The "law" of supply and demand certainly does work in many market contexts (if imperfectly, the modeling of which has built many economists' careers).  BUT, those market contexts are built on formal laws and informal norms, on historical trajectories and institutional structures that are cultural, social, human.

It is important that we understand that markets are social contrivances and not the product of natural laws--doing so gives us the freedom to use markets to promote the sort of life we value.  Sure, truck and barter is part of the human condition, as Adam Smith phrased it.  But we construct just how we go about it.  And seeing markets as something we create gives us the power to change them toward the ends we best see fit.  In contrast, seeing markets as expressing natural laws allows our leaders to disavow hard moral and political choices onto the moral logics of the market.  Industrial policy, regulation, and all the other currently unfashionable ideas should not be seen as misguided attempts to change the inevitable, but as morally neutral tools to orient markets towards ends that we collectively (if I dare use that word) decide are the best.
Posted by Ted Fischer at 2:17 PM 2 comments: