As with fine wine, provenance and terroir have become key elements of value in the world of high-end coffee. Like wine, coffee’s complex flavor profile is especially sensitive to climate, moisture, and soil conditions; and the highest priced coffees are varietals provenanced from single estates. In 2012, Korean buyers paid $500.50 a pound for a micro-lot of that year’s mocha varietal from the Guatemalan finca El Injerto (bought by YT Infinite, doing business as Brian's coffee). The entire lot was only 8 pounds, but the benchmark New York commodity price at the time was just about $170 per hundredweight, meaning that the El Injerto mocha sold for almost 300 times the going rate for washed arabicas.

I did not try this $500 coffee, but I have sampled a number of El Injerto’s more reasonable (if still pricey) alternatives. They produce my favorite coffee by far, with a deep, almost smoky, base and highlights of dark berries and citrus. Tastes vary, but by El Injerto holds its own with the very best. The owner of El Injerto, Arturo Aguirres, told me that until the late 1970s, they transported all of their coffee by mule, as they were no passable roads, and they he continued to plant the high altitude exotic varietals (Mocha, Pacamara, Maroquipe) even when they were not selling, because they were good coffees and he took pride in his coffee production. When others were switching their land to rubber and palm trees, Aguirres held out. And now it is paying off with the premiums his specialty coffees command. (See also Allison Aubrey's NPR piece on Journey of a Specialty Coffee Bean from Cherry to Cup.)

Are his coffees worth $6.60 a cup wholesale (and FOB Huehuetenango, Guatemala)? If it is what the market will bear, one could argue, then it seems that they must be. "Objective" quality (by established tasting standards) and market scarcity play an important role, but we cannot discount the symbolic values at play: the relative positioning of conspicuous consumption; the imagined, personal relationship with a producer (and his inspiring story); and underwriting it all, the cultural and market shift among the global affluent toward artisanal and singular products.  Yesterday, the NY Times reports on the consumption side of such coffees at high-end retailers such as Stumptown and Intelligensia.

Throughout the twentieth century, coffee production in Guatemala was a highly concentrated industry composed of a small number of very large producers. These cafetaleros operated privately owned plantations (fincas) and depended on temporary, migrant labor to deliver what had become a high volume, low cost commodity product. The large producers traded with equally large and concentrated exporters and roasters who then completed the global value chain; this was the coffee that found its way into cups around the world as Folgers, Maxwell House, and hundreds of other brands. In the largely Maya highland communities where labor was recruited, working on coffee fincas was, and is, seen as employment of last resort because of the low wages and harsh conditions.

Today, we find a large number of former coffee laborers and subsistence farmers supporting their families by growing and selling their own coffee. The rapidly proliferating number of small producers—at least 50,000 new growers over the last 20 years, doubling the number of producers in Guatemala—has significantly altered the face of Guatemalan coffee. In the western highlands, the vast majority of these new producers are indigenous. They are cultivating increasingly differentiated varieties of high quality coffee on their own small parcels of land using family labor, and increasingly hiring day workers; a majority process and sell their coffee through a cooperative. Their production is sometimes sold as domain-specific varietals directly to small and medium sized roasters around the world rather than disappearing in vast, undifferentiated lots of commodity.

In a recent study, Bart Victor and I look at how coffee plays into the desires of Maya farmers for a better life.  Aguirres is not typical of the group—a ladino, relatively affluent, a third generation coffee farmer—but the prices his provenanced coffee commands dramatically illustrate the high end of this new market, and the potential for other farmers. El Injerto operates at the very upper end of the market, but the demand for quality and provenance has driven up prices for all of the high altitude Guatemalan producers, most of whom are today relatively smallholding Maya farmers.

There is dignity, many of these farmers told us, in working one’s own land, being one’s own boss, and they see coffee as a potentially lucrative way to keep their own production and be finically independent. They view seasonal plantation labor as a form of dependency, wrought with the hardships of being separated from one’s family, that they want to avoid if at all possible. They also prefer to hold wealth in land, and see coffee production as a way of expanding land holdings (or first time buying). The farmers we interviewed overwhelmingly want to get ahead, to achieve algo más in their lives, to see their children flourish, and they see coffee as a partial route to that. See Jennifer Johnston's piece on Consumer taste for high altitude beans shifts opportunity to small farmers.


We did our study in 2011, right after the March 31 peak New York C price of $298.93 (per hundredweight); two years later it has fallen to $135.43 (see price chart below).  At the same time the Coffee Rust fungus threatens large portions of Guatemalan production (estimates range from a drop of 15% to as high as 50% next year).  Price drops and coffee rust are certainly hitting the new entrant smallholders the hardest, and Bart and I hope to do follow up studies over the next year to see what impact this has had and farmers' livelihoods. 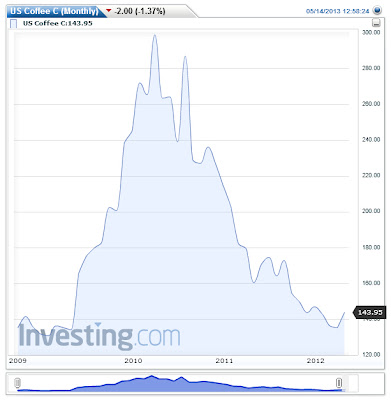 Noted economist Daniel McFadden makes a radical call for his field to pay more attention to the insights of anthropology and other disciplines in his NBER Working Paper "The New Science of Pleasure."  Summing up lots of recent research, McFadden claims that economics needs to look other fields not just to explain irrational anomalies, but to consider that complex subjects are the norm.  As The Economist puts it, "Homo economicus, not his fallible counterpart, is the oddity."

McFadden is on comfortable disciplinary ground in arguing for the inclusion of insights from behavior economics and psychology--the endowment effect, hyperbolic discounting, and other such cognitive quirks have been well documented by Daniel Kahneman and others.

Where McFadden pushes the envelope is his call for incorporating anthropological and social science perspectives into economic modeling to understand the role of identity, social relations, and persuasion in decision making.

The manuscript I just finished (The Good Life: Aspiration, Dignity, and the Anthropology of Wellbeing) echoes a number of McFadden's observations, which I take to be an encouraging sign of the changing zeitgeist.  For example, while economists have long privileged revealed preferences (observable behavior) we need to take more seriously stated preferences (what folks say they want to do).  Revealed preferences are taken by economists to be more real: it is thought that when the rubber hits the road and the cash changes hands, one reveals one’s true preferences.  At the same time, a laser focus on revealed preferences discounts the importance of the cultural—the fact that choices are delimited, as in the all too common scenario we are faced with on the grocery store aisle and in the voting booth of choosing between the lesser of evils. Stated preferences, in not being bound to the immediate here-and-now, often take a longer-range view of overall preferences and ideals. Stated preferences are more likely to be concerned with non-material values; these are given more weight in the long term project of one’s life, one’s overall wellbeing. Often they are connected to identity.

In my book, I also focus on the role of dignity and fairness, which The Economist also neatly highlights in their review of McFadden's paper: "Dignity is not something mainstream economics has much truck with.  But creating a sense of dignity turns out to be a powerful way of affecting decisions."  It is also a key element of wellbeing.
Posted by Ted Fischer at 9:04 AM No comments: