The Page 99 Test blog takes its cue from Ford Madox Ford, who remarked "Open the book to page ninety-nine and read, and the quality of the whole will be revealed to you."

I was asked to apply the Page 99 Test to my new book, The Good Life: Aspiration, Dignity, and the Anthropology of Wellbeing:
In this era of globalization, of transnational corporations and ubiquitous internet access, it is easy to forget just how different national economies sometimes are—and what we might learn from different ways of organizing markets.
Germany’s soziale Marktwirtschaft (“social market economy”), also known as Rhenish capitalism, places a greater emphasis on stakeholders . . .   CONTINUE READING at Page 99 Test: http://page99test.blogspot.com/2014/11/edward-f-fischers-good-life.html
Posted by Ted Fischer at 2:47 PM No comments:

Talking About The Good Life, with Bart Victor and Sten Vermund 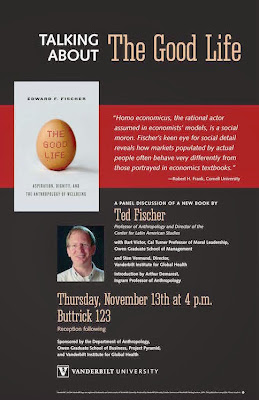 Posted by Ted Fischer at 7:56 AM No comments:

Measures for the Good Life: Stated Preferences and the Greater Good

The goal of the economy, politics, and social institutions should be to promote wellbeing among people as broadly as possible. Yet, the questions remain: what exactly is wellbeing? and, How do we measure it for public policy purposes?

An important new paper by Daniel J. Benjamin, Ori Heffetz, Miles Kimball, and Nichole Szembrot (2014) "Beyond Happiness and Satisfaction: Toward Well-Being Indices Based on Stated Preference" makes the case that while neoclassical economics focuses almost exclusively on revealed preferences, in the public policy domain this is impossible as individuals rarely make such choices. They constructed an instrument to measure stated preferences along with subjective wellbeing. By asking respondents to gauge stated satisfaction from alternative scenarios, they are able to measure marginal utility of aspects particular aspects of wellbeing.

It turns out that the eudaimonic aspects (being a good person, living according to certain personal values, having a life that is meaningful) rank among the highest.
Posted by Ted Fischer at 4:06 PM No comments: