Today is Mardi Gras, Fat Tuesday, the ecstatic culmination of carnival in New Orleans.  Köln celebrates carnival with equal fervor, but here the big day is not today, Veilchendienstag, but yesterday’s Rosenmontag parades.
The season itself begins at 11:11 on November 11th, especially auspicious last year (’11).  But things really get started the Thursday before Ash Wednesday.  That is Weiberfasnacht, Women’s Carnival, with women taking over city hall and cutting men’s ties in the streets.  Forewarned, I wore an old tie for my symbolic castration at the hands of colleagues at the Max Planck Institute.
Carnival theory (from Bakhtin to Roberto DaMatta) is all about the liminal state, turning the world upside down for a bit before resuming the normal state of things.  In fact, it has been said that carnival is a sort of pressure release valve that actually supports the social order even as it mocks it.
Having lived for a while in New Orleans, I developed an affinity for Carnival celebration there, and the similarities and differences with Köln are striking.  There is more overt political satire here than in New Orleans.  And this year there was a scramble to rework a number of floats making fun of Christian Wulff, the German president, as he resigned on Friday.
There are more costumes here as well.  From my unscientific sample counting folks walking by on the street in front of my apartment, more than 60% were dressed in some sort of costume, and this gives a critical mass to masking, making it the norm rather than the deviation.  The minimal costume is the ever present red clown nose (the Pappnas) or a Köln coat of arms painted on the face.  But there are a huge number of one-piece furry animal outfits, with maybe 20% of those in costume wearing a fuzzy rabbit or dog costume.
There is much less nudity than in New Orleans, but more mild vandalism (tearing down traffic signs, breaking bottles in the street, lots of public urination).
But the vibe is very similar to New Orleans.  The street food here is more along the lines of mettwurst (a raw beef spread served on a roll) rather than Lucky Dogs, but other than that it feels a lot like Mardi Gras in German.
Posted by Ted Fischer at 3:50 PM 3 comments:

Biking Against Traffic on a One-Way Street, and other ways of managing many modes of transportation

It is striking how many modes of transportation one sees on the street in Koeln, or most German cities for that matter.  Of course, there are the cars (more German and less Asian than we see in the States) and the public transportation (here we have buses, subway, tram, and rail).  But what I find really intriguing are the many human powered conveyances.
There are a plethora of bikes, from what seem like dangerously low recumbents to almost comically tall lamplighters.  There are cruisers and racing cycles, Amsterdam bikes and myriad just plain bikes.  The normal bike here, a “city bike,” has a chain guard, fenders, and a carrier (often with a basket)—sehr practisch for everyday use.  (And oddly difficult to get a bike so configured in a place like Nashville—I had to haul the one I use back as excess baggage a few years ago.)  You see many more unicycles here, along with skateboards and two-wheeled scooters.  And these are used by a wider demographic than we would find in Nashville—it is not uncommon to see men in their thirties on a skateboard or women of a certain age using a scooter.  That always seems a little incongruous to me, but I do find the sheer range of transportation stimulating and provocative.  Why shouldn’t I take a skateboard to run a short errand in the pedestrian zone?
It is not all rainbows and unicorns, as my friend Brent says, or, here, unicycles and hot air balloons.  In fact, Koeln is not an especially bike-friendly city, at least compared to Hannover, where we lived before.  It 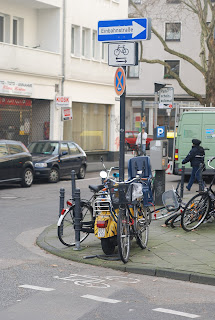 was quickly rebuilt after the war, with plenty of four and six lane roads criss crossing it; some have bike lanes and some do not; although I just live a couple of kilometers away, it is not easy for me to bike to the Hauptbahnhof.
Still, there are a number of clever public planning devices the Germans use that I wish we would have more.  It is often the case, for example, that a street with one-way car traffic will allow have two-way bike traffic.  This slows down cars, gives an advantage to bike commuters in terms of cutting route time, and is practical, recognizing bikers’ tendencies to stretch traffic rules (perhaps justified by a greater awareness of their surroundings and traffic).  There are other devices to slow cars down, including bike stands in the street, pedestrian crossings, and subtle humps in the road.  We have such techniques, of course, in the States, it just seems that we don't use them as generously.
If, for economic, health, and environmental reasons, a city decided it would be desirable to reduce traffic, such devices provide a gentle nudge to encourage alternative forms of transportation. 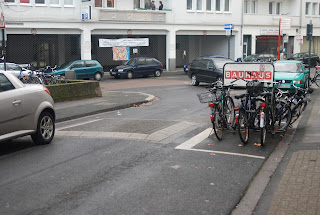 The two sites of my anthropological fieldwork have been Guatemala and Germany.  At first blush, they would seem to share little more in common than an initial "G."  While equally exotic in their own ways, looking a little deeper we find a surprising number of similarities.  Whether this is a case of ancient contact, modern diffusion, or just uncanny parallel evolution, I will leave it to the reader to decide.  But consider these traits and behaviors found in both places:

-a bureaucratic obsession with paper certificates, seals, tax stamps, and so forth; hard copy, notarized copies are often required for mundane tasks;

-folks make routine purchases in smaller quantities (tending more to what can be easily carried) and, subsequently, more frequent trips to the store than is the Stateside norm

-there is an attention to and use of titles, such as Ing., Diplm., Lic. In addition to Prof. or Dr.

-there is a formality in everyday address: use of Sie and Ud.

-one finds small kiosks on almost every corner

-on the train in Germany conductors go through after every stop and check tickets of new passengers–remembering who has been checked; this same role is assumed by the ayudantes on Guatemalan buses

-willingness to make long commutes in order not to move, attachment to place

-more public urination; drunk men and young kids will pee in the streets, for example, if a toilet isn't handy

-ritual drinking: a variety of public rituals that involve ceremonial drinking, often from the same glass
Posted by Ted Fischer at 4:54 AM No comments:

Turning off the Elevator and other Lessons in Workplace Safety

Since I am going to be at the Max Planck Institute for more than six weeks, I had to attend my Erstunterweisung Arbeitssicherheit (First Training in Work Safety) today.  It lasted over two and a half hours, with an hour and a half for classroom presentation and discussion and then an hour or so of practice, which included a thorough tour of the building, from the cellar to the top floor.  (The MPIfG has a little over 100 researchers and staff, occupying five floors of nicely sized building.)
Relishing this ethnographic opportunity, I was fascinated by the event, although it might just be the sort of thing I would roll my eyes at were I forced to do it at home.  Still, I admired the thoroughness, and the thoughtfulness that it provoked about the surroundings we take so much for granted.  Who knew where the master shut off switch for the elevator was?  Now I do, with a demonstration on how to use it should I need to (although, the only scenarios I can imagine tend toward the James Bond-ish).
I do feel well protected here, I must say.  About a quarter of the employees here have undergone intensive first aid training (a two day seminar and bi-annual follow up), and each floor has a number of designated first responders.  The defibrillator is in the sick room, which looks like a school nurse’s office, complete with an exam table to lay on.
Every piece of electrical equipment in the building is inspected by an electrician every two years (lamps, coffee machines, computers, everything); if you bring a coffee maker or electric pencil sharpener from home, it needs to be registered.  We are shown how the electrical wiring is placed under the buildings slightly raised floors (in case a desk chair breaks through the floor, perhaps, severs a cable, and electrifies the desk.  You never know.)
All ladders, stools, and other equipment are inspected every year, with a seal attached to show approval.  We had a mini-course in ladder engineering and proper use, which was fascinating.  We learned that the Institute’s ladders are certified only for under 90kgs; it was mentioned that there are two people at the institute who are therefore not allowed to use the ladder.
We were particularly attentive to fire.  Our instructor, the head of safety here for over 20 years and a man who takes his job very seriously, had previously trained as a fireman, and the building is extensively outfitted with fire doors, extinguishers, and evacuation routes.  During the practical section, we went to different parts of the building and were presented with different scenarios, asked to describe and act out what we would do: what if the fire is between you and the stairway?  how to open the windows? When to close the fire doors? What to do with someone in a wheelchair?  When and how to call the fire department (only from downstairs).
There was also a section on suggestions for health and safety.  We were shown just how to use the ergonomic desk chairs, demonstrating the different adjustments; if we have back problems we can request a standing desk.  They recommend keeping one’s eyes about 70cm from the computer screen, and to take regular breaks to move around.
It was suggested that we not eat at our desk, or at least not while working: the keyboard is the place most filled with germs and bacteria in the office; it was recommended that we take our food instead to the cafeteria to eat.
While I have the luxury of relishing the experience, I also hear my friend Jon’s voice saying, in an almost sorrowful tone, that, boy, that much regulation must cost a ton of money.  And it is pretty intrusive too.  Imagine trying to start a small business and keep it running while dealing with such onerous regulatory burdens.  It isn’t easy or cheap, but the big concerns like Volkswagen or even the Max Planck Institute can manage.  But the little guy with entrepreneurial ambitions suffers.  This is true, and certainly part of a pronounced German non-embrace of entrepreneurialism, despite the talk of all the Silicon Rheines and Alleyways.
Perhaps the emphasis on security and stability over risk at the workplace is an apt metaphor for the balance (or imbalance, depending on one’s perspective) between regulation and competition in the German economy generally.
Posted by Ted Fischer at 4:21 PM 1 comment: