Stated Preferences and the Alternative-Vote

Thursday Britain votes on changing its electoral system in favor of an alternative-vote (AV) process. David Cameron is campaigning against the change, while his junior coalition partners are pressing hard to see it win. If passed, the AV system would certainly hurt the Tories and Labour, the two dominant parties, most. (See coverage in The Economist and in The New York Times.)

In an alternative-vote system, voters rank their candidates in order of preference. Votes are counted in rounds. Each time, the lowest rank candidate is eliminated and his or her supporters’ votes move to their next highest ranked candidate. And so on, until a candidate reaches 50% of the vote.

The AV system allows one to vote for the candidate he or she truly supports, the candidate that best matches their vision, without regard for the pragmatics and cosmetics of electability. They can thus reveal their true stated preferences while, through ranking candidates, still support their least worst alternative.
Stated preferences, as compared to revealed preferences, tend to be more pro-social, long-term oriented, and less concerned with immediate gains. Through our stated preferences, we can imagine the world as it ought to be, not just as it is, and mechanisms such as AV allow us to pursue those visions. No wonder the established political parties are worried.
Posted by Ted Fischer at 10:54 AM No comments: 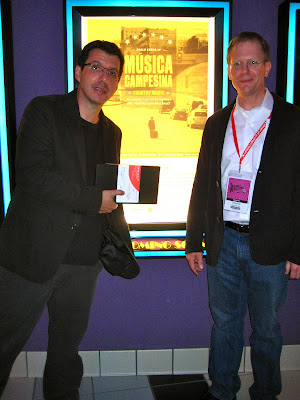 The film I helped produce got a positive review in Variety, the Hollywood bible. Check it out:

Variety Reviews - Musica Campesina/Country Music  - Film Reviews - Buenos Aires -
Review by Robert Koehler
As easygoing and rambling as its wandering hero, Alberto Fuguet's "Country Music" is a likable tale of a Chilean man trying to get his bearings in Nashville.  Pic might qualify as the first Latin American-made mumblecore movie, preserving many of that genre's ambling, talky qualities, and adding the accent of a foreigner attempting to make sense of America, and maybe find a way into the music biz. Distribs typically averse to South American cinema may show interest, as will a long roster of fests.
READ THE REST OF THE REVIEW HERE
Posted by Ted Fischer at 10:53 AM No comments: