Yesterday’s NY Times (1/12/2010) reported on the mounting losses (of money as well as political support) of German Landesbanks.

Landesbanks are a key part of the unique German financial system. The 11 regional, state-owned Landesbanks provide commercial banking services and act as clearing houses for local public savings banks (or Sparkassen). The Bayerische Landesbank (Bayern LB) lost billions into its venture into international investment banking; the Bayern government has had to bail it out with over $5 billion in taxpayer money and its former CEO is under criminal investigation. WestLB, the Landesbank of North-Rhine Westphalia invested heavily in mortgage derivatives required over $15 billion in subsidies and loan guarantees to stay afloat—and as part of the bail-out deal must be sold by the end of 2011.

Reaction to the bank’s excesses (modest in comparison with private U.S. investment banks’) and pressure from the European Union’s antitrust division promise to radically change the Landesbanks structure, reducing implicit and explicit state subsidies. Indeed, the excess pursuit of profits—and the high risks that entails—should be curbed. But at what expense?

In fact, the traditional Landesbanks provide a key pillar of the German financial system, a system that has helped Germany avoid the worst of the global recession (at least until now). Unemployment in the U.S. is now higher than in Germany—a situation unimaginable even just a few years ago.

And, in fact, as the Germans move to a market more open to private competition, the U.S. is moving toward greater government intervention and regulation. (In many ways, political and economic, Germany seems to operate counter-cyclical to the U.S.)

The Landesbanks and the Sparkassen are chartered (and legally bound) to serve the public good. (And they lost sight of that in the pursuit of profits in the recent derivatives boom.) This gives them, ideally, a very different set of incentives. In fact, Sparkassen are closely associated with their home cities, and their logo (a large red “S” with a dot over it) is ubiquitous across 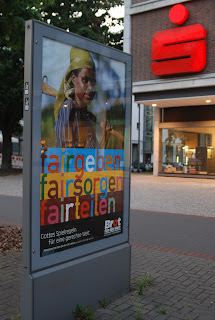 Germany’s 500 Sparkassen have over half of all German private savings deposits and make more than 20% of loans. Owned by local governments and by their regional Landesbanks, Sparkassen are prohibited from operating outside of their home region. They do not pay taxes and have an obligation to invest locally. Their connection to the state allows them to borrow at AAA rates, as they are implicitly and explicitly backed by local governments.

The Sparkassen and Landesbanks represent—and fund—the German model of “social market economy.” They are obligated to support local development, and provide banking services to those who might not otherwise qualify on the private market. They were able to do so and still make a handsome profit because their debt was guaranteed by their respective local regional governments, giving them superior credit ratings and access to capital and below market rates. But that changed on 18 July 2005, when, due to E.U. regulation, their debt stopped being backed by the government guarantees. And so the Landesbanks ventured into investment banking in pursuit of profits.

From a free-market perspective, this is a much needed reform—the Sparkassen distort the market through their unfair advantage. Now they have to pay market prices for their capital, and pass those costs along to their consumers. However, the Sparkassen serve an important function that will not be replaced by the private sector—there are greater public benefits that accrue from their existence than their opportunity costs to the private sector. Their function is not just private market lending but also local and regional development.

Indeed, we might look to the system Germany is abandoning as we try to configure a finance system that promotes the public good as much as private gain.
Posted by Ted Fischer at 7:46 PM