Not Available in America


In this age of globalization, of frictionless markets, it is interesting to take note of what does not travel, what is still only available in some place.  Some of this is cultural specificity, of course.  The demand for burkas in Guatemala is minimal, the appetite for German lard spread rare in the US.  But even beyond culturally quirky items (and high-end designer goods), there are a number of useful things that don’t cross our fluid economic boundaries.

Much of the difference is subtle.  The cut of clothes in Germany, for example, is different than in the US, and not just expensive clothes.  Haircuts too: they use a noticeably different technique here to cut hair, noticeable even to me.  But we find other, more noticeable things as well, things that might could or should be more widely available:

In the US, for example, it is exceedingly difficult to find good street bicycles, what the German’s call “city bikes.” With a chain guard to protect clothes and a carrying rack for hauling things, these are the commonplace workhorses of German bike culture.  Despite their yeoman’s work, there is a beauty to a well made city bike, a simplicity, durability, and responsiveness that helps meld the bike to rider.  The bike I drive in Nashville was bought in Amsterdam, and I have been looking into getting a replacement while I am in Germany.  The bike shop here is generally a pleasure to deal with, very professional and very knowledgeable.  If I do buy the one I am looking at, however, I will need to pay cash, as the store, which sell bikes costing thousands of Euros, doesn’t take credit cards.  And they looked at me funny for even asking. 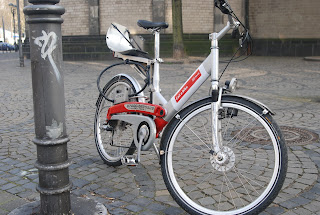 Speaking of bikes, Deutsche Bahn has a great system of “Call-a-Bike.”  All around Cologne are these DB bikes locked to bike racks and poles.  To use one you call from your cellphone the number on the bike; you get a code that you enter into the lock and then you use it as you like (6 Euro cents per minute) and lock it where you wind up.  There is, of course, an app to find nearby bikes.  Lots of cities are exploring bike sharing, but the cell phone angle (and even more important, the ubiquity) makes a big difference.

Some beauty products don't seem to travel well, and the Germans have a well developed personal grooming 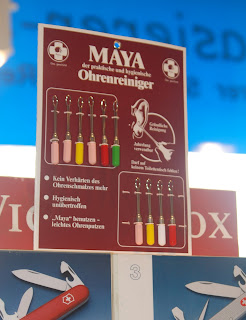 market.  The most popular toothpaste (by a wide margin) comes in two tubes: you use one in the morning (for cavities) and one at night (for gums); I think the Crest we use in the States puts all of this into one (indeed, from the label it does everything but spit for you).  And then there are earwax removers.  No you probably aren't supposed to put metal wires into your ears, but sometimes you just need to get something out of your ear.  And there is no better way, really, than the Maya Ohrenreiniger.

The best way to drink coffee is brewing single cups; it takes more time, but slowing pouring hot water over a single cup produces superior results. But it is always awkward when you have more than a couple of folks over.  So, now, if you have three people over for coffee, neighborhood kitchen store has the answer: 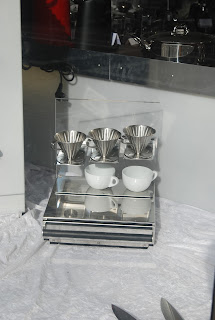