The Remarkable Folks of Tuskegee 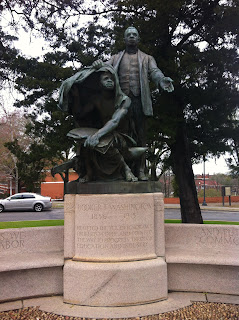 Work called me to Tuskegee, Alabama this weekend, to pay a visit to the storied Tuskegee Institute (now known as Tuskegee University).  Truth be told, I wasn't looking forward to the drive or the trip.  My New Year's resolution was to travel less, and every little trip eats into my sense of resolve.  But this turned out to be one of the most rewarding.

Tuskegee is a remarkable place.  Well, the town itself looks to be a pretty run-of-the-mill poor, rural Alabama community.  (Having grown up in nearby Dothan, I'm familiar with the type.)  But The Institute (as it seems to still be most commonly called) is a vibrant place that recalls the vision of its founder, Booker T. Washington, to provide a top-notch education to African-Americans, to instill a sense of personal improvement tied to the collective good.

One of the events we sponsored there was a K-12 teacher workshop on the Cuban literacy campaign.  I was approached by a middle-age white man at one point, who greeted me and struck up a conversation.  Mr. Rogers said that he teaches 7th and 8th and 12th grade history in his town of Tallassee, Alabama.  As I probed more, it turned out that this was but one of his vocations.  He also coaches (basketball, baseball, and football), and plays an important role in the town volunteer fire department and frequently drives the water truck.  And he is a Baptist minister, preaching on Sundays.  The school he teaches at has 75-80% of the children on free lunches; more than half live with their grandparents or other relatives.  But Mr. Rogers is passionate about their education, and he brings them to the Tuskegee archives to teach them about the local struggles for civil rights.  He himself has seen a lot.  His dad was a State Trooper in Selma in the sixties, and Mr. Rogers remembers seeing his father hold the line against protesters marching across the bridge there.  And today, here he is, a white Baptist minister in Tallassee, Alabama doing all he can to even the current laying field for the kids he teaches.

Mr. Rogers didn't tell me all of this to brag.  Indeed, I had to pull it out of him.  It is just what he does, not something to make a fuss about.  And when I told him how impressed I was, and grateful that folks like him were teaching, he said, "yeah, but it's not as important as what you do."  And he meant it, although quite the opposite is true.  I may have been wearing a nicer tie than he was that night, but the world is a much better place for having Mr. Rogers and all those like him.
Posted by Ted Fischer at 9:00 AM