Reading the major German newspapers (Die Zeit, Frankfurter Allgemeine Zeitung-although perhaps not the more mass-market Bild tabloid), one is struck by how often the word "Kapitalismus" appears-much more often than in the New York Times or the Nashville Tennessean. The U.S. press talks a lot about "the economy," but that is different-it takes a particular free-market variety of capitalism for granted, simply the way things are. Explicitly naming the system ("capitalism") highlights the more overtly negotiated nature of the German variety of capitalism-not so taken for granted that it can be left unnamed, not yet a part of a hegemonic common sense. (On the other hand, it should be noted, Kaptalismus is sometimes used by German journalists as pejorative shorthand for market excesses.) 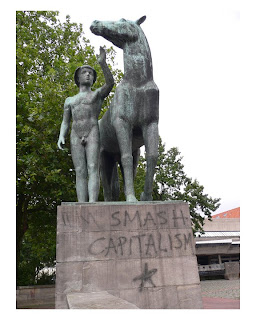 On editorial pages, subway graffiti, and in daily conversation, one finds in Germany a widespread critical perspective toward capitalism. Even the Hannoverian neighborhood Südstadt Magazin (which is filled mostly with ads from local businesses and announcements of neighborhood events) takes this tone: a recent letter from the editor warned readers that "capitalism demands its tribute, and it demands it first and foremost from the place that appears weakest." A 2008 survey by the Bertelsman Foundation found that 75% of Germans felt that economic conditions in their country are "unfair." Overwhelming majorities agreed or strongly agreed that workers deserve a bigger percentage of company profits (96%) and that managers should worry less about profits and more about the social impact of their decisions (93%). More Germans than ever had lost confidence in the German "social market" economy (spiegel.de).


What Germans see as so unfair would seem downright socialist to many Americans. It is important to remember that while we often speak of "capitalism" (or "globalization") in the singular, there are in fact a multitude of capitalisms, or varieties of capitalism. Germany's version of compassionate capitalism-the soziale Marktwirtschaft (social market economy), the Rhenish model, the German model, ordoliberalism, or the stakeholding model-differs in important ways from Anglo-American capitalism. The German model tends to be more "coordinated" than the "liberal" Anglo-Saxon market economies.

And this speaks to questions of what is and what ought to be: if we question the basis of the economy, if free-market capitalism is not seen as somehow "natural" or inherently given, then we open ourselves up to new possibilities. What is the right balance between labor and capital interests? What should be the trade-off between leisure time and income? Rather than defer to mathematically-modeled market forces, how can ensure that our economy is producing the greatest utility (as broadly conceived) for the greatest number?

Indeed, perhaps if we saw our "pursuit of happiness" more as a pursuit of "fulfillment," and if we were willing to define fulfillment holistically-rather than over-privilege a single factor, such as income-we would induce very different incentives into our economic system, and strike a different balance between individual material advancement and regulatory frameworks that promote common goods. We might look to Bhutan's index of Gross National Happiness as an example. And wouldn't this get at fulfillment in a way that escapes measures of the GNP, much of which is composed of unhappy transactions (paying the divorce lawyer, or one too many bottles of vodka, or whatever).
Posted by Ted Fischer at 5:38 AM