There is a price to pay for the many intangible benefits we gain from living in a community. Personally, I like it that the butcher, the guy at the office supply store, the woman at the café, all know who I am and make small talk when I come in. We aren't great friends, what we know about each other is pretty shallow, and yet there is a sense of human connection that gives greater satisfaction to my little economic transactions.

Yet, we are too often unwilling to pay the price to sustain our communities. The reasons are varied, from the eternal tension between individual freedom and social obligation to a distrust of bureaucratic inefficiencies and corruption to what some would argue is an innate propensity for economic maximization.

Germans are generally more willing to pay a premium for positive social externalities. This is partly cultural and partly structural. There is a tendency to value quality over quantity in personal consumption, and yet this is often enforced through regulations that reduce choice. Practices are rapidly changing here, but compared to the U.S. the difference in attitudes is striking.

Within a few blocks of my Südstadt apartment in Hannover, there are four bakeries, an apothecary (Apotheke) , drug store (Drogerie), a news stand, a book store, a bottle drink store and delivery service (Trinkhalle), an office and school supply store, and any number of kiosks and cafes. These are all owner-operated, single-location small businesses. (They coexist alongside the chain supermarkets in the area.)

I could take a bus out to the Staples and get my printer paper cheaper, but it is worthwhile for me to pay a bit more to save the time and hassle of getting there and to have a brief social interaction with my purchase, and leave with the feeling that I have supported a business and a person that I like.

But in late July and August, it can be a real pain in the ass, as small businesses here take a summer break (Sommerpause) and reduce their hours. I've been frustrated lately going to get bread (the bakery that makes the good Gästebrot was closed) and a notebook (the store closes early during Summer). 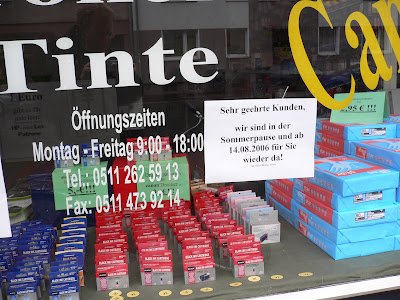 When I first started coming to Germany, I found the laws and norms around store opening hours inconvenient to the point of being oppressive. Under the Ladenschlussgesetz, the federal law that governed store opening and closing hours until 2006, most stores could open only Monday through Friday between 6:00am and 6:00pm and for a half day on Saturdays. Some cities and states additionally allowed extended hours on a "Long Thursday" (or other weekday) once a month. Stores in train stations and gas stations were exempt, and these grew into mini-supermarkets for emergency purchases. (Since 2006, state laws have replaced the federal regulation, and most have significantly loosed restrictions; two grocery stores in my neighborhood now stay open until 8:00pm six days a week.)

These hours can be a huge hassle as one tries to balance shopping for necessities with the other demands of daily life. But it also helps sustain small businesses, as many family-run stores cannot afford to stay open extended hours. So, it would seem, the market can make a rational choice for us here: we may value convenience more than the experience of shopping in local stores, and so the market responds. But it might also be the case that we find it difficult to place a clear value on the social externalities of going to our local stores, which heightens the attraction of a clear financial, euros-and-cents-in-my-pocket advantage.

Behavior economists have show that most of us are highly predisposed to take modest short term-gains over more lucrative long-term rewards. Would you rather I give you $1 right now or $2 in a few weeks? Waiting a bit would produce a 100% gain, but most would rather take the money now and run. Most smokers would like to quit and see the long term gain in abstinence, but the pull of the immediate hedonistic gain proves too compelling.

Might it be the case then that laws, regulations, and social norms that reduce our range of choice and individual freedom might make us better off? Not just better off physically or financially, but a greater self-defined, subjective sense of well-being, of being the sort of people we want to be, approaching an Aristotelian eudaimonia.

Having to do one's shopping on a Saturday sometime sucks. But the Saturday shopping experience also speaks to the social externalities of store opening hour laws. Forcing a concentration of shoppers at certain times brings folks from all walks of life into communion. Sure, it is convenient to grocery shop at 2:00am, but there are also benefits for us collectively when we all go out Saturday mornings and see each other.

It is not only store opening hours, but vacation times that can be a hassle for customers, as my late summer shopping experiences here have shown. By law, German workers get four weeks of paid vacation, although the national average is a much higher 7.8 weeks of vacation (paid and unpaid); the U.S. average is 3.9 weeks. All in all Americans work on average 1824 hours per year and Germans work 1480. The value added per employee in the U.S. is substantially higher, but productivity per working hour is higher in Germany.

This suggests one (economic) reason why Americans work more: their time is more valuable. Salaries are higher, and so taking time off become more costly. Other economists have suggested it is European tax rates: working is not as lucrative in Germany, which tilts the balance toward taking more time off.

Another, more plausible, solution also emerges from economics, namely that this is a coordination problem. Except for those at the extremes of the socio-economic spectrum, vacation time is not decided unilaterally. This is not just a matter of formal regulation but informal norms as well. A young associate in a law firm would be at a huge disadvantage if she took off on vacation while her colleagues worked. It might be the case that everyone at the law firm would love to take off more time, but the coordination problems of the network-the structures and incentives of the system as a whole-would thwart those desires. Americans might want to work less, but in the competitive economy there is little chance to coordinate such desires. In a recent paper, Alberto Alesina, Edward Glaeser, and Bruce Sacerdote (quoted in The Economist) argue that "national policies that enforce higher levels of relaxation can, at least in theory, increase welfare." And not just in theory, I would add.
Posted by Ted Fischer at 5:29 AM