I am here in Germany writing about Germany, the context providing my daily inspiration. The dachwohnung (roof apartment) where I stay is a fourth floor walk-up (which, translated into American conventions would be on the fifth floor—in fact I walk up six steps to get to the 0 floor).

I live in the Südstadt section of Hannover. This area of town is older than most and solidly middle class, with a few pockets of relative poverty and several sections undergoing a modest gentrification by young couples.

The streets here are quaint, in that slightly oppressive way quaint can be. Südstadt was built up during the 1920s and 1930s, with apartment buildings encircling entire blocks. It was spared the worst of the bombing that destroyed most of Hannover during the war. All around Südstadt are oddly winding streets, with contiguous rows of old reddish-greyish-brown brick apartment buildings. They are charming, well-kempt, Bauhaus or Art-Deco-ish in design, with the occasional whimsical element (such as a gargoyle or a jutting balcony). 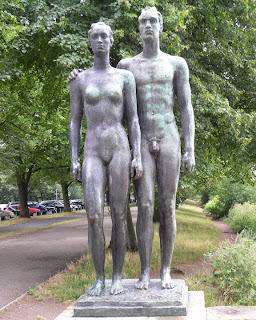 There is always a slightly sinister undercurrent to this sort of German quaintness—that nice little family-owned cheese shop down the street whose sign proudly proclaims “Zeit 1933” in a typeface that looks at once Art-Deco-ish and fascist. On the edge of Südstadt is the Maschee, a man-made lake built in 1934-1935 as a public works and employment project. Around the shore are bike and walking paths, boat rental stands, and a number of statues of sportsmen, Aryan-esque nudes, and other motifs of the period. Here, for example, is the sculpture “Menschenpaar” (“Human Couple”), dated 1939 (artist: George Kolbe). (After 1937, the Hannover government was solidly Nazi, and over the next few years more than 2500 Jewish residents were deported to concentration camps.)


Inside the apartment blocks are large courtyards, sometimes planted with gardens, sometimes given over to parking. From any apartment, one can see the living and bedroom windows of almost everyone on the whole block, a panopticonic effect that was perhaps intended. I can hardly help but notice what my neighbors are watching on t.v. or when they have dinner or when they go to bed.

This monitoring, as Foucault point out, becomes internalized in ways subtle and profound. And yet, in Germany, such monitoring coexists with stringent post-war privacy laws meant to protect citizens from being singled out for approbation or retribution. One cannot even publish a photo or name without permission; in the newspaper, criminals are referred to by their first name and initial.

And it is these laws that vex operations such as Facebook and Google Earth in their German operations. Architecture and public service ads encourage Germans to show “Civil Courage” in calling out vandals and bad behavior, but not through institutional channels—decentralized. But Facebook shakes up this distinction between content provider and decentralized peer-to-peer communication.
Posted by Ted Fischer at 4:26 AM